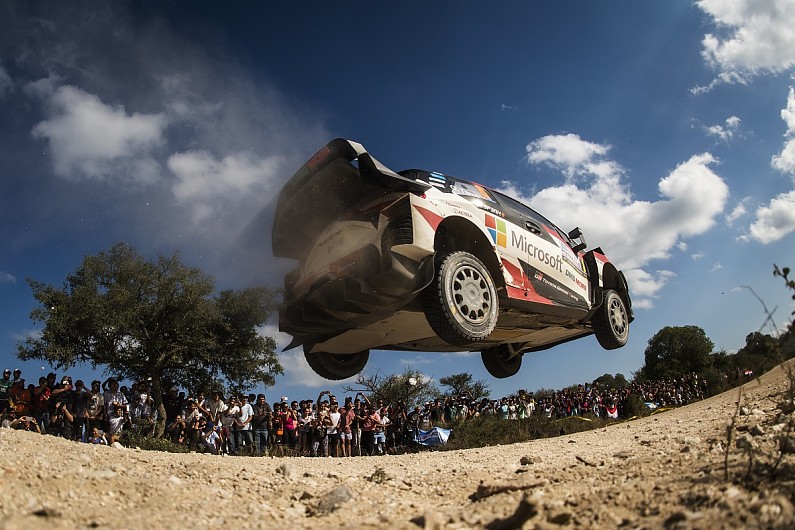 Estonian driver Tanak – formerly of M-Sport Ford – extended his streak of stage wins on a foggy loop of tests to six in a row as no one had the pace to live with him aboard his Yaris WRC.

For most of the loop, Neuville trailed Citroen’s Kris Meeke until the penultimate stage, where the Belgian jumped ahead.

Meeke described that test, Chuchilla Nevada – Rio Pintos, as “one of the most difficult you could do in a rally car”, mainly down to the fog where visibility was as low as 20 metres in places.

Neuville’s only issue was a pacenote mix-up 750 metres from the end of SS10, but he still went second quickest on that test.

He also beat Meeke on the super special SS12 which ended the morning loop, to hold a gap of 10.1 seconds ahead of the Northern Irishman.

Dani Sordo continued a consistent drive synonymous of the Spaniard as he holds fourth for Hyundai. He’s within 20s of his friend Meeke, and not out of the podium hunt in the testing conditions.

Sebastien Ogier competed with self-admitted caution to hold fifth, in a steady drive for the five-time WRC champion.

He was 54s slower than Tanak on the penultimate stage of the loop but didn’t report any issues.

After going slower than Sordo on the loop-ending super special, Ogier trails the Spaniard by 41.4 seconds.

Craig Breen, who returned to Citroen after missing the last two rallies as he was replaced by Sebastien Loeb, had held sixth.

But on SS11 he crashed heavily. Heavy cosmetic damage aside – which included co-driver Scott Martin holding the door shut for the remainder of the test – he commented that the roll cage appeared intact. It dropped the Irishman down to 14th.

Hyundai’s Andreas Mikkelsen replaced Breen in sixth, and holds a gap of 7.7s ahead of M-Sport’s Elfyn Evans.

Ogier is also within Mikkelsen’s sights, as the gap is only 7.6s, while a third fastest time from Evans on SS11 brought him deeper into the three-way fight.

Mikkelsen coped with the fog with a novel method, by using the i20 Coupe WRC’s trip meter to measure distance off of his pacenotes, such was the low visibility.

Esapekka Lappi crashed on SS11 after a pacenote mistake and holds ninth, falling half a minute behind Evans, but ahead of Teemu Suninen who appears in a Ford Fiesta WRC this weekend run by M-Sport.

Rovanpera’s time was 28.7s quicker than Tidemand in that test, and after the super special he leads the class for R5 machinery by 23.6s.