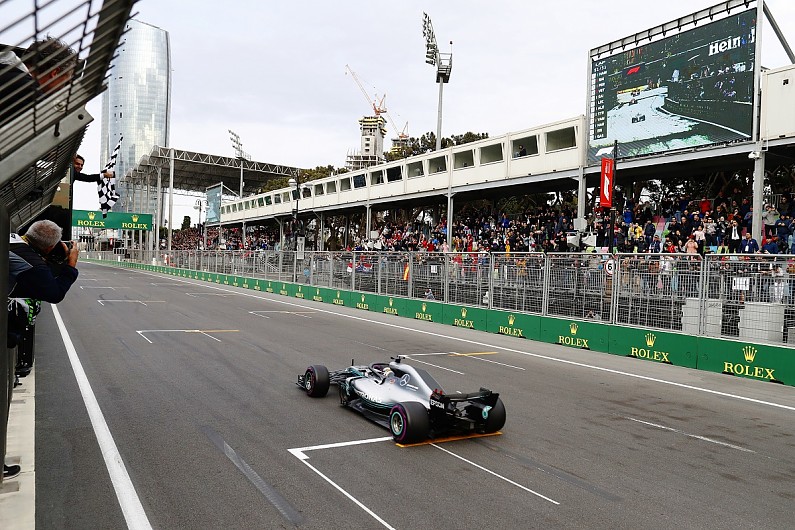 Sebastian Vettel was on course to score a comfortable win before the race was changed when Daniel Ricciardo rear-ended team-mate Max Verstappen at Turn 1 in a battle for fourth.

Bottas survived a lunge from Vettel into Turn 1 at the subsequent safety car restart and appeared to be heading for victory before a puncture handed Mercedes’ first win of the year to Hamilton, with Kimi Raikkonen second and Sergio Perez beating Vettel to a shock third.

The race started in frenzied fashion after a pair of first-lap incidents triggered a safety car to clear substantial debris.

Esteban Ocon attacked Raikkonen and tried to pass the Ferrari around the outside of Turn 2, which led them to run side-by-side down to Turn 3.

Ocon turned in for the apex with Raikkonen almost completely alongside, and the ensuing contact pitched the Force India into the wall and out of the race and forced Raikkonen to pit for a new front wing. The incident will be investigated after the race.

At the same moment, further back, Sergey Sirotkin rear-ended Perez’s Force India into Turn 2 and on the exit of the corner was squeezed between Fernando Alonso’s McLaren on the left and Nico Hulkenberg’s Renault on the right.

Hulkenberg clipped Sirotkin into Alonso, which broke the front-left of the Williams and forced Sirotkin to retire immediately as Alonso limped back to the pits with shredded right-side tyres.

Vettel backed the field up hugely at the restart and kept everyone bottled up until the last possible moment before the final safety car line.

He bolted clear and established a comfortable lead over Hamilton, who nudged the gap down below four seconds before locking up both front tyres on lap 21 of 51.

That forced Hamilton to change to soft tyres as Vettel and Bottas, who was running a distant third, extended an ultra-long first stint on supersofts.

Hamilton’s lack of a pace advantage on fresh, but harder, rubber allowed Vettel to stay out until lap 30 before taking on softs, but Bottas ran even longer.

The Finn was still circulating strongly on his original supersofts when a fraught battle between the two Red Bulls finally hit breaking point.

Ricciardo was quicker than Verstappen at various points through the first half of the race but was rebuffed several times, and the two even made light contact at one point exiting Turn 1 as Verstappen ran wide into Ricciardo after defending the inside line.

Verstappen lost the place into Turn 1 just after mid-distance but got back ahead by pitting a lap later than Ricciardo, then swiftly came under attack as Ricciardo picked up a huge tow on the run down to Turn 1.

Ricciardo feigned to the right and then dived back to the inside, but Verstappen covered it and was slammed into as Ricciardo locked up.

Verstappen’s car was lifted briefly into the air and both battered Red Bulls skated down the escape road into retirement. 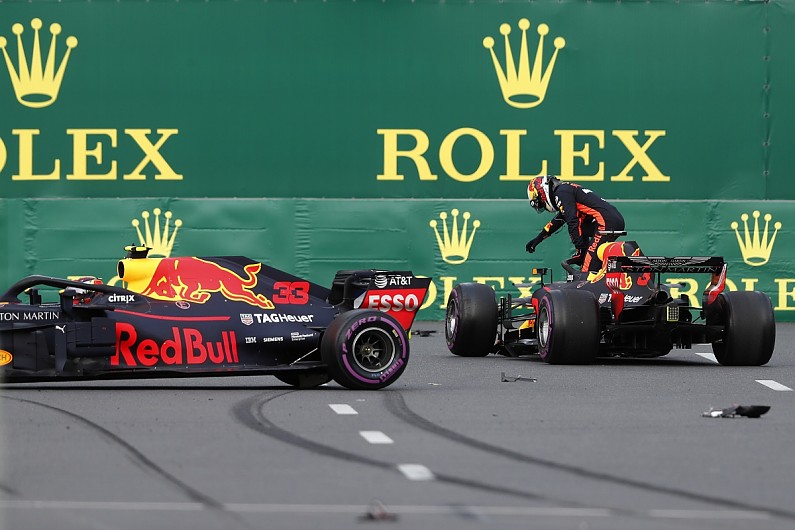 The ensuing safety car was a lengthy affair, mainly because Romain Grosjean inexplicably lost the rear of his Haas warming his tyres on the straight from Turns 13 to 14 and slammed into the wall from sixth position.

That left four laps of green-flag racing, and Vettel lunged Bottas at the restart but locked up and ran wide, which dropped him to fourth behind Hamilton and Raikkonen.

Bottas bolted clear over the rest of the lap and was out of DRS range of Hamilton but ran over debris finishing the lap and cruelly picked up a left-rear puncture at the end of the start-finish straight.

That freed Hamilton into the lead with Raikkonen a comfortable second as Perez drafted Vettel, struggling with a flatspotted tyre, to score a shock podium despite Vettel’s efforts to retaliate. The result gives Hamilton a four-point championship lead.

Carlos Sainz Jr scored his best result with Renault in fifth after battling ahead of the Red Bulls early on with an excellent stint on ultrasofts. His team-mate Nico Hulkenberg had also been in this fight before an early crash.

Charles Leclerc scored the first points of his F1 career with a stunning drive to sixth for Sauber, picking his way through the chaos of the opening lap and crucially clearing the Williams of Lance Stroll early on.

Stroll fell to eighth at the finish behind Alonso, who recovered from his torrid opening lap that left him needing a new front wing and gave him floor damage.