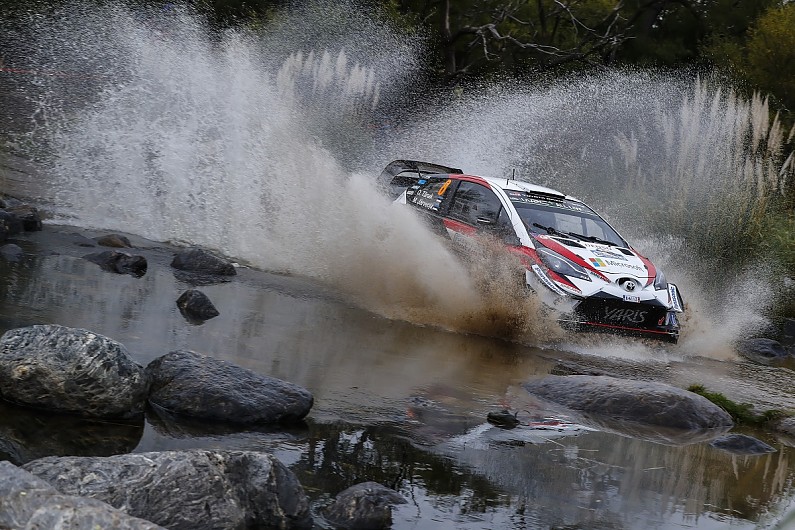 Clipping a rock on Friday’s first stage sent Tanak into a spin and gave him steering damage, temporarily dropping him to ninth.

But after that, he was unstoppable. He won 10 of the next 12 stages – only missing out on fastest times on the short superspecials – and was into the rally lead by Friday lunchtime.

Tanak eventually built a 46.5-second advantage that he nursed through Sunday’s leg to win by 37.7s.

Hyundai completed the podium with Thierry Neuville and Dani Sordo, the team’s title contender Neuville emerging ahead of his part-time team-mate in a Saturday battle.

Andreas Mikkelsen had led briefly in the third Hyundai prior to Tanak’s surge to the front, and then picked up a puncture shortly after losing first place.

Mikkelsen fell to eighth in that incident and could only recover to fifth, falling 4s short of beating Ogier to fourth.

Ogier spent one stage in the lead on Friday morning before running first on the road took its toll, and he also admitted to being much more cautious than his rivals in the thick fog that hit Saturday morning – when he lost touch with the podium battle.

Citroen had a tough weekend; Kris Meeke was fighting the Hyundais for the podium places before a Saturday afternoon puncture that consigned him to a seventh-place finish.

His team-mate Craig Breen, back in the line-up after making way for Sebastien Loeb’s comeback for two events, crashed heavily on Saturday.

Jari-Matti Latvala was perhaps the most frustrated man in the field. He was running ahead of Toyota team-mate Tanak on Friday before breaking his suspension on a rock and having to retire from the weekend due to associated damage.

Esapekka Lappi was delayed by both a Saturday incident and a Sunday puncture on his way to eighth in the third Toyota.

Last year Elfyn Evans came agonisingly close to his first WRC win in Argentina, but he was off the pace this time and only reached sixth as others hit trouble. Teemu Suninen was a muted ninth in M-Sport’s other Ford.

Pontus Tidemand won WRC2 in 10th overall. His Skoda team-mate Kalle Rovanpera had snatched the class lead with a bolder run through Saturday morning’s fog, only to crash out on the final day.