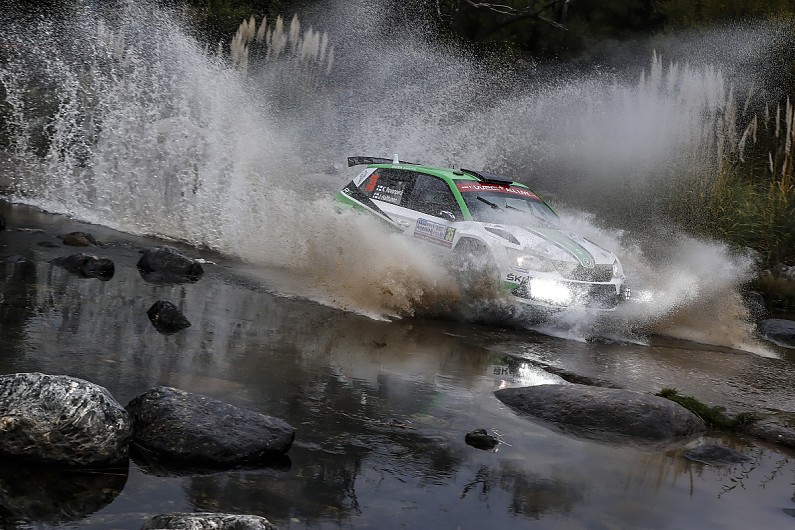 Kalle Rovanpera was hospitalised for checks after crashing out of the Rally Argentina WRC2 lead at more than 100mph.

The Skoda factory driver was leading his class and holding 10th overall when he crashed off the road on the second stage on Sunday morning.

His Fabia R5 got out of shape on a fast left-right section, was pitched up on two wheels and rolled over a tent and into a car park.

Rovanpera was taken to hospital in Cordoba for a brain scan after he complained of dizziness. He was allowed back to the team hotel on Sunday night.

“It was a big accident. It was my fault, I got this section wrong – I made the mistake in the recce,” Rovanpera told Autosport.

Asked about his Skoda landing among parked spectator cars, Rovanpera said: “Maybe this wasn’t the best place to put them. It’s not so nice place to land.”

Rovanpera had overcome reigning WRC2 champion team-mate Pontus Tidemand to take the class lead in Argentina when fog hit Saturday morning’s stages, but Tidemand was back within nine seconds of him when Rovanpera crashed.

“It was really a bad end to what had been a good rally for me,” Rovanpera added.

“I really wanted to win WRC2 here and I was pushing for that.

“I learned a lot from my first visit here, except for Monte Carlo maybe this is the rally where I learned the most.”

His next WRC2 outing will be on his home event in Finland in July.