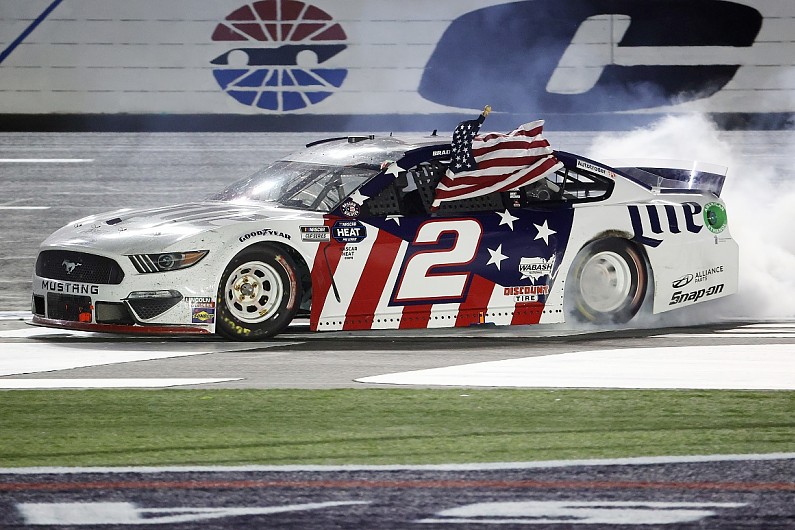 Brad Keselowski recovered from the back of the grid in the Charlotte 600-mile NASCAR Cup race to win, while second-placed Jimmie Johnson was disqualified post-race for a technical infringement.

A spin on lap 399 of a scheduled 400 for Hendrick Motorsports’ William Byron brought out a caution, with Byron’s team-mate, long-time leader Chase Elliott, opting to pit for fresh tyres for overtime, whilst the likes of Keselowski, Johnson and Ryan Blaney stayed out on 45-lap old tyres.

On the final restart, Keselowski and Johnson broke away, with the former’s Ford Mustang – which was sent to the back of the pack following changes made after scrutineering before the race – looking comfortable in the lead, crossing the line 0.293 seconds clear of Johnson’s Chevrolet Camaro to score his 31st Cup win.

Johnson fell narrowly short of ending his winless run which now stands at 102 races, but was later thrown out of the results when his #48 machine’s rear alignment numbers were found to be off.

Elliott recovered to take third, having taken the lead of the race on lap 365 after fighting back from two unscheduled pitstops just after half-distance to fix spring issues on his Camaro, which dropped him from fifth to the rear of the field.

Ryan Blaney was an early mover, making up nine places in the first 10 laps of the race, which was suspended for just over an hour on lap 50 following a brief rain shower passing over the Charlotte circuit.

The Penske driver then drove a solid event to fourth, ahead of Kyle Busch, who also opted to pit with Elliott when the Byron caution came out.

The reigning Cup champion made it back to fifth, ahead of Stewart-Haas Racing’s Kevin Harvick, who had an anonymous run to sixth in his #4 Mustang machine.

Martin Truex Jr looked like a contender to make it back-to-back wins in the Cup series’ longest event, looking comfortable when he hit the front, although he did not feature much in the race after losing two positions during pit-stops on lap 348 following a Joey Gase spin. 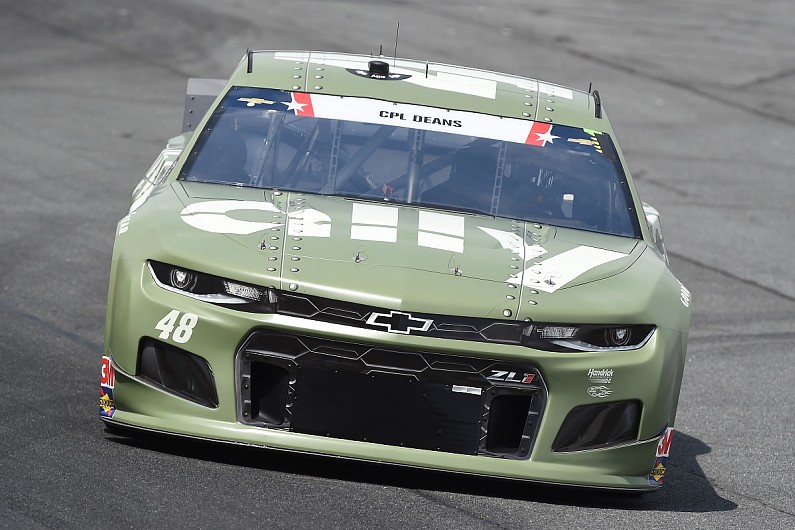 Having qualified fourth, Matt Kenseth endured a tricky afternoon, with a spin on lap 275 condemning him to the lower order and an eventual 27th-place finish, while stage three winner Joey Logano slipped to 14th for Penske, after he too decided to pit under the late Byron caution.

Alex Bowman looked serene in the lead of the race, controlling his pace expertly ahead of renowned 1.5-mile circuit driver Truex, until he started to struggle with his tyres and slow pit-work under the Gase caution cost him five places.

The #88 Hendrick driver secured victories in stages one and two, but slipped to 20th at the flag, although he will start the second Charlotte race on Wednesday from pole as the top 20 finishers will be reversed.

JGR’s Denny Hamlin’s race was over before it started as, at least two pieces of tungsten ballast fell out of his #11 Camry on the formation laps to the grid.

He was hauled into the pits by NASCAR officials, as the team worked to rectify the problem and restore ballast to the Toyota.

Hamlin lost eight laps in the pits and did not feature in the race, climbing to 30th at the flag, albeit still seven laps behind winner Keselowski.

If NASCAR opts to enforce the rulebook on the #11 car, Hamlin’s crew chief, car chief and head engineer will be suspended for four races, meaning they will not be able to return until Homestead on June 14th.