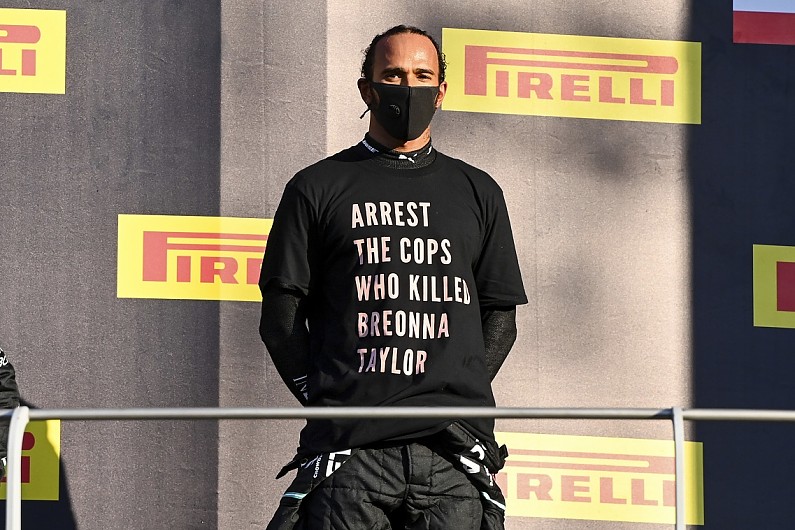 The FIA is looking into whether or not Lewis Hamilton broke any rules in wearing a T-shirt at the Tuscan Grand Prix that highlighted police brutality.

Hamilton, who took pole position and victory at Mugello, wore a T-shirt before and after the race, that said on the front: “Arrest the cops who killed Breonna Taylor.” On the back, it featured a picture of her face and the words: ‘Say her name.’

Taylor was a black medical technician from Louisville, Kentucky, who earlier this year was shot in her home by police after they attempted to serve a no-knock warrant on her home during a narcotics investigation.

Her boyfriend, Kenneth Walker, fired a gun at the police believing them to be intruders, and they returned fire. Taylor was shot eight times and died from her injuries.

The police officers involved in the incident have been under investigation to see whether they broke the law by using excessive force, or were simply acting in self-defence after being shot at.

The controversy surrounding the legalities of the police officers’ actions has prompted some to suggest that Hamilton’s T-shirt was a political opinion, something which his own Mercedes team hit back at on social media on Monday.

“We’re not bringing politics into F1, these are human rights issues that we are trying to highlight and raise awareness of. There’s a big difference,” said the team in response to posts criticising Hamilton. 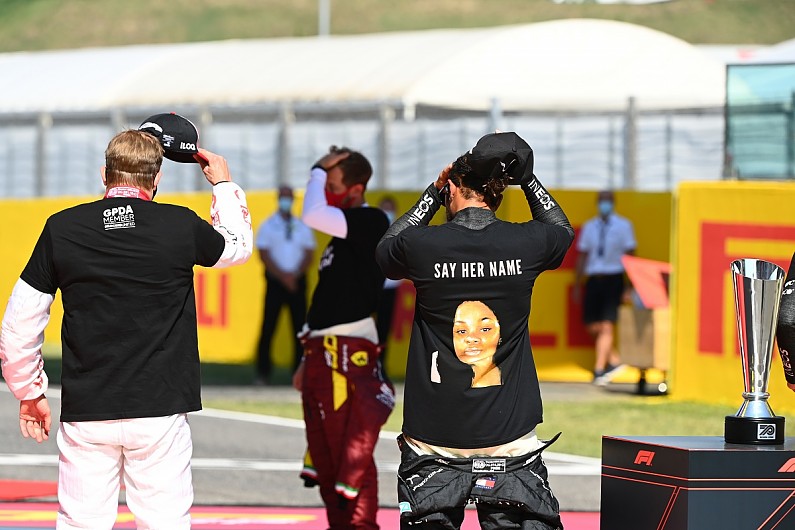 The FIA has been doing all it can this year to help drivers promote their anti-racism message.

In a regular note that is sent to drivers regarding their pre-race anti-racism ceremony, F1 race director Michael Masi makes clear: “The FIA supports any form of individual expression in accordance with the fundamental principles of its statutes.”

The FIA statutes state that the governing body is neutral in everything it does.

Its documents state: “The FIA shall refrain from manifesting discrimination on account of race, skin colour, gender, sexual orientation, ethnic or social origin, language, religion, philosophical or political opinion, family situation or disability in the course of its activities and from taking any action in this respect.”

There is also a reference in the International Sporting Code which states that teams may not use political advertising on their cars, but there is no specific mention to drivers.

“Competitors taking part in International Competitions are not allowed to affix to their automobiles advertising that is political or religious in nature or that is prejudicial to the interests of the FIA,” states article 10.6.2 of the International Sporting Code.

Hamilton said that he had hoped to wear the T-shift before but he had had difficulty getting hold of it.

“It took me a long time to get that shirt and I’ve been wanting to wear that and bring awareness to the fact that there’s people that have been killed on the street and there’s someone that got killed in her own house,” he said about the T-shirt.

“And they’re in the wrong house, and those guys are still walking free and we can’t rest. We have to continue to raise awareness with it.” 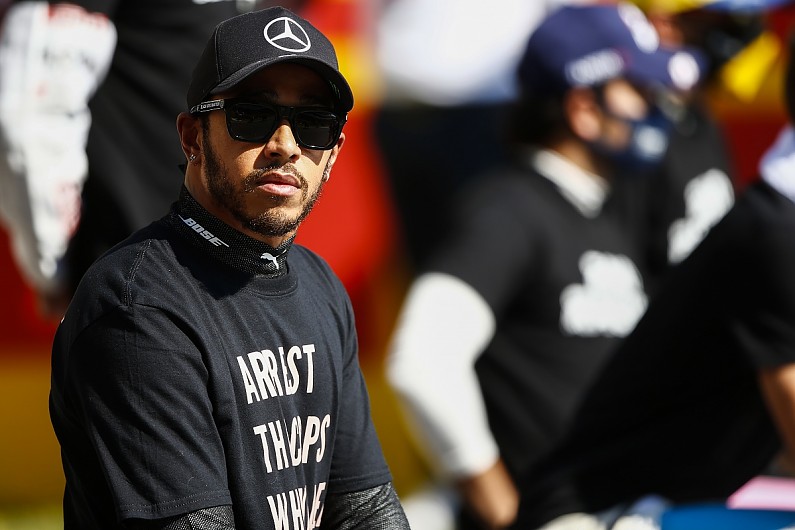 The FIA has shown itself in the past to have little tolerance for attempts by people to make political statements – but this has mostly been related to stunts on the podium.

Back in 2006, Turkish Grand Prix organisers were handed a $5 million fine after then Turkish Cypriot leader Mehmet Ali Talat presented the winner’s trophy and was introduced as “President of the Turkish Republic of Northern Cyprus”, which was recognised only by Turkey.

The Jerez track in Spain also lost its slot on the F1 calendar after the local mayor made an unscheduled appearance on the podium.

Engel secures Nurburgring 24 pole for Mercedes
Vinales “happy to struggle on Friday” for Misano MotoGP breakthrough
Stefano Domenicali in F1: Who is he and why is he replacing Chase Carey?
Michael Jordan, Denny Hamlin form NASCAR Cup Series team for Wallace in 2021
Hinchcliffe fills in at Andretti Autosport for rest of 2020 after Veach split